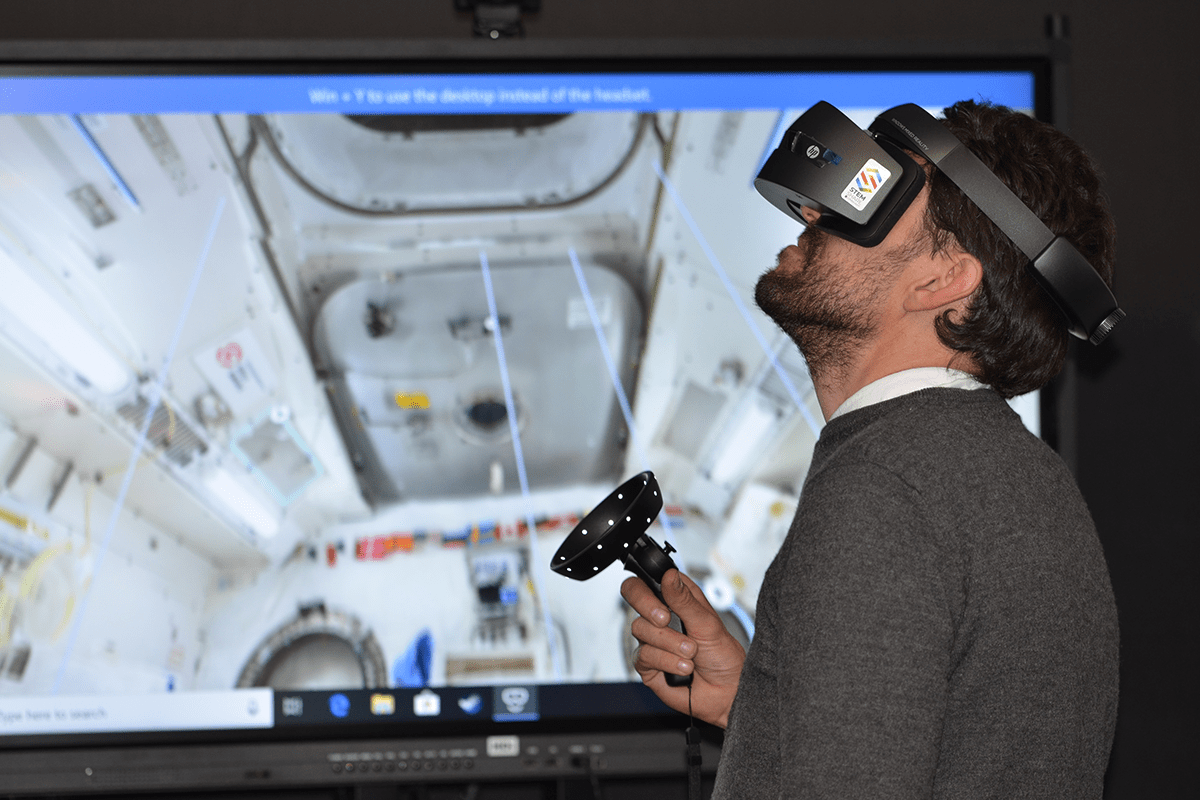 The Austrian Bundesrechenzentrum and ViARSys showcased the convergence of two revolutionary technologies into public service. A combining of blockchain secured eDemocracy and Virtual Reality lets citizens decide over a bridge project.

The picturesque Town of Scheibbs, located on the old Iron Road in the heart of Europe is once again pioneering public convergence of a new technology. In 1886, when street lighting was run by fossil fuels all over the world, Scheibbs was the first City in the former Austro-Hungarian monarchy to illuminate public space with a strange new technology, electric lights, gadget known by only a few early adopters with budget and space enough to accommodate this magical new technology. Electric lights illuminated the Central Square and the eyes of Scheibbs proud citizens

In December 2019, almost 134 years later Scheibbsers again take the lead in converging new technology into public life, participating in the world’s first use of Virtual Reality and eDem, a blockchain secured e-voting system that allows secure and anonymous citizen participation via electronic devices. Voters could see the different versions of the new to build the Heubergbrücke bridge over the Erlauf River. The very same river that will soon hold another water electricity plant to further illuminate city lights and Virtual Reality headsets with clean renewable energy.

A virtual journey into the future

ViARSys created a virtual 3d-reconstruction of the project area using photogrammetry blended with 360 imagery and CAD-models to create a realistic view of a place very well known to every person in Scheibbs. Citizens were stunned to find the visualization of the designs for their new bridge integrated in a photorealistic walk-through-environment that even displayed the mountains surrounding the city. Voters were able to view their new bridge from multiple predefined sites or move freely through the virtual simulation. Three different designs for the new “Heubergbrücke” bridge crossing the river “Erlauf” were on the vote to be rated with 1 to 5 stars either directly in VR, via a touchscreen interface mounted on the VR Stations after the experience or via smartphone. All citizens older than 10 years were eligible to vote as Scheibbs Mayor Franz Aigner also included the cities youngsters in the democratic process. Mayor Franz Aigner:”We are proud to pioneer citizen inclusion and democratic participation in Scheibbs. VR and the local installation in our City Hall ensured, that all citizen could be included regardless of age or tech affinity while the eDem system still kept votes anonymous and secure“

The results were presented in the Scheibbs city hall Jan. 8th 2020 and the construction of the chosen variant “Tetratop” by Architect Mag. Josef Hofmarcher will start this spring.

The team of ViARSys accommodated the voting process and were overwhelmed by the positive reactions of voters. Konrad Gill, founder of ViARsys:  “The two weeks in Scheibbs gave us a lot of joy showcasing VR for the first time to hundreds of people in the city council house and especially the huge attendance of senior citizens and their straightforwardly adoption of the new technology convinced us that VR, used correctly, is ready to improve democratic inclusion of people of all ages and in all demographics.  Virtual Reality provides the most effective and inclusive way to support decision making for infrastructural projects, by allowing everyone to understand how his daily surroundings are adapting”.

eDem is an eDemocracy solution based on blockchain technology developed by the BRZ. Particular attention is paid to security, reliability and transparency in the coordination process. The separation of identity and digital ballot box makes voting anonymous, but at the same time it ensures that only one vote is possible. In the future, BRZ eDem should simplify participation processes in cities and communities for citizens and for the executive bodies.

INVESTOR ALERT: Kirby McInerney LLP Reminds Investors That a Class Action Lawsuit Has Been Filed Against Tupperware Brands Corporation and Encourages Investors to Contact the Firm Before April 27

The RiskIQ Illuminate App in the CrowdStrike Store

IoT in Healthcare Market to Reach USD 176.82 Billion by 2026: Emerging Popularity of Smart Wearables and Remote Patient Monitoring to Add Impetus to Market