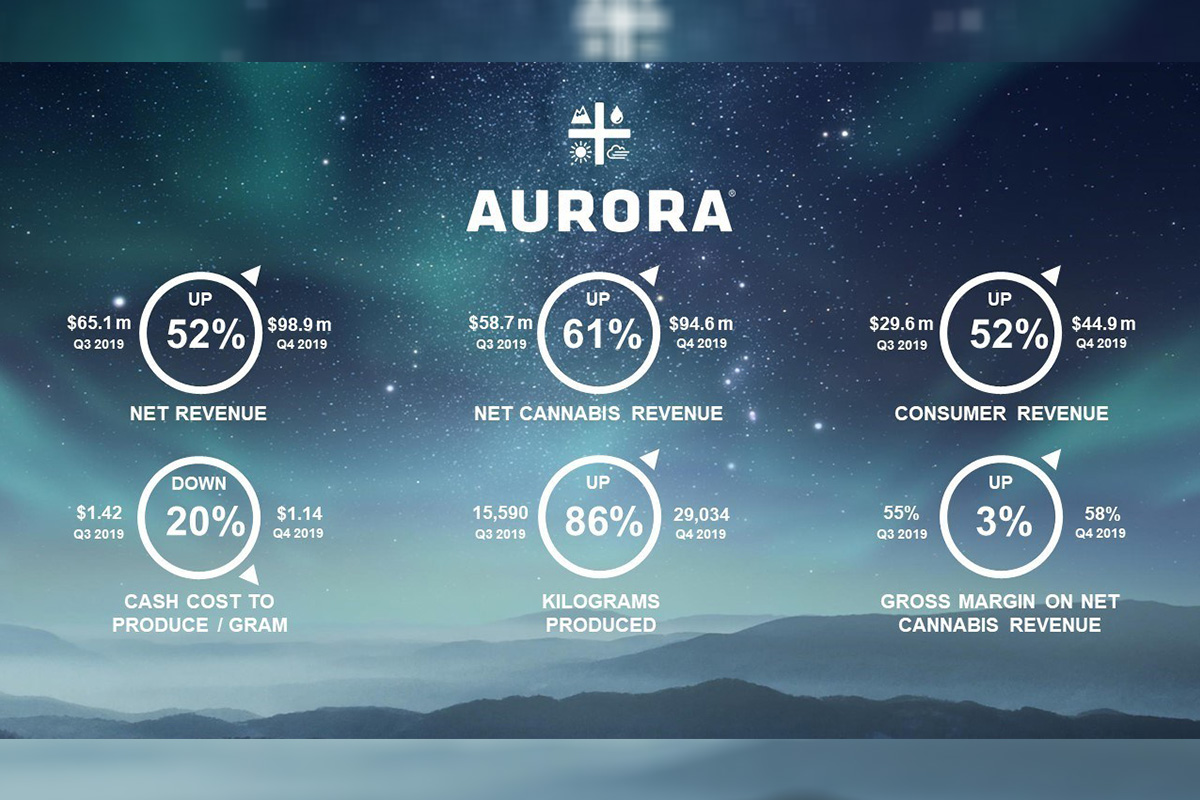 “In 2019 Aurora took its place as the global leader in cannabis production, research, innovation, and international market development. We are executing on all our strategic priorities,” said Terry Booth, CEO. “Our best in class cultivation methods allow us to grow consistent, high-quality cannabis at scale. Because of this, we’ve delivered solid revenue growth in the fourth quarter. We are working to extend our reach in the U.S. markets. Our partnership with the UFC is a basis to explore CBD-from-hemp and hemp food products. We are also exploring additional opportunities and leveraging our Strategic Advisor. We are focused on building a sustainable, high-margin business while providing patients and consumers with access to safe and reliable medicine.”

Glen Ibbott, CFO, added, “We continue to see strong growth in cannabis revenues in both medical and consumer categories. Our cultivation execution continues to drive production costs lower and improve gross margins. Aurora’s diversified product portfolio remains in demand with patients and consumers alike. With the Canadian launch of derivative products in the coming months, we have made the necessary investments to ensure readiness and focus on a variety of value added products. We are very excited to supply an expanded consumer market with premium cannabis and new product forms.”

(Unless otherwise stated, comparisons are made between Fiscal Q4 2019 and Q3 2019 results and are in Canadian dollars)

Gross margin on cannabis net revenue increased to 58% in Q4 2019, compared to 55% in the prior quarter. Gross margin improvement was driven by the continued decline in cash cost to produce per gram and higher gross margins achieved on bulk sales.

Q4 2019 SG&A increased by 9% to $72.9 million, compared to the prior quarter. The change was primarily driven by an increase in fulfillment and shipping costs related to the growth in consumer cannabis sales and continued investment in sales initiatives, distribution network, and partnerships to conduct research, develop products, and drive brand awareness. Aurora will continue to invest in infrastructure and talent required for market share growth in the global medical and consumer cannabis markets but will remain intensely focused doing this as efficiently as possible.

In Q4 2019, adjusted EBITDA loss improved 68% to $11.7 million from $36.6 million in the prior quarter. Developing a profitable and robust global cannabis company is extremely important to Aurora. In fiscal 2019 Aurora was focused on excellence in execution, and the Company’s KPIs show its success in this regard. Furthermore, Aurora has addressed previously identified production bottlenecks and continues to see strong sell-through of the Company’s products at the retail level. However, the Canadian consumer channel continues to experience challenges at the retail level in key markets and resolution of this issue is beyond the Company’s control. Aurora is working closely with all our regulatory and channel partners to streamline distribution as the Company continues to track toward positive adjusted EBITDA on a consolidated basis.

The Company’s operating facilities current annualized run-rate production capacity is in excess of 150,000 kg per annum, based on planted rooms. As the industry leader in purpose-built cultivation, Aurora is focused on producing a consistent supply of high-quality, low-cost product to meet evolving market demand. Aurora is well-positioned to respond to market conditions quickly with shorter lead times, increased harvest cycles and high plant yields.

The global cannabis and hemp markets represent a significant opportunity for Aurora and the Company will continue to make the necessary investments today to build long-term value for shareholders. However, Aurora will take a balanced approach to these investments with a focus on operating a sustainable and profitable business.

The introduction of new product formats to the Canadian consumer market this fall represents a significant opportunity for the Company. Aurora expects to have a robust product line-up ready to launch in December. Given the very early stage of development of the consumer market in Canada and international medical markets, management anticipates that quarter to quarter sales volumes and revenues may be volatile. The Company expects adjusted EBITDA to continue to improve in the future due to expected revenue growth, improvements in gross margin and prudent SG&A growth.

The passing of the U.S. Farm Act presents new opportunities in the largest cannabis and hemp-derived CBD market globally, and as such Aurora is committed to establishing a substantial operating footprint in the U.S. As part of the U.S. market strategy, the Company is considering its stakeholders and how various state and federal regulations will affect its business prospects. A number of alternatives to grow Aurora’s presence in the U.S. market are under evaluation and the Company is committed to only engage in activities which are permissible under both state and federal laws. Management believes there are currently market opportunities that are legal at both state and federal levels that can add operating cash flows and be critical pillars of Aurora’s strategy and long-term success.

Aegis Capital Corp. is pleased to announce its commitment to Equity Research