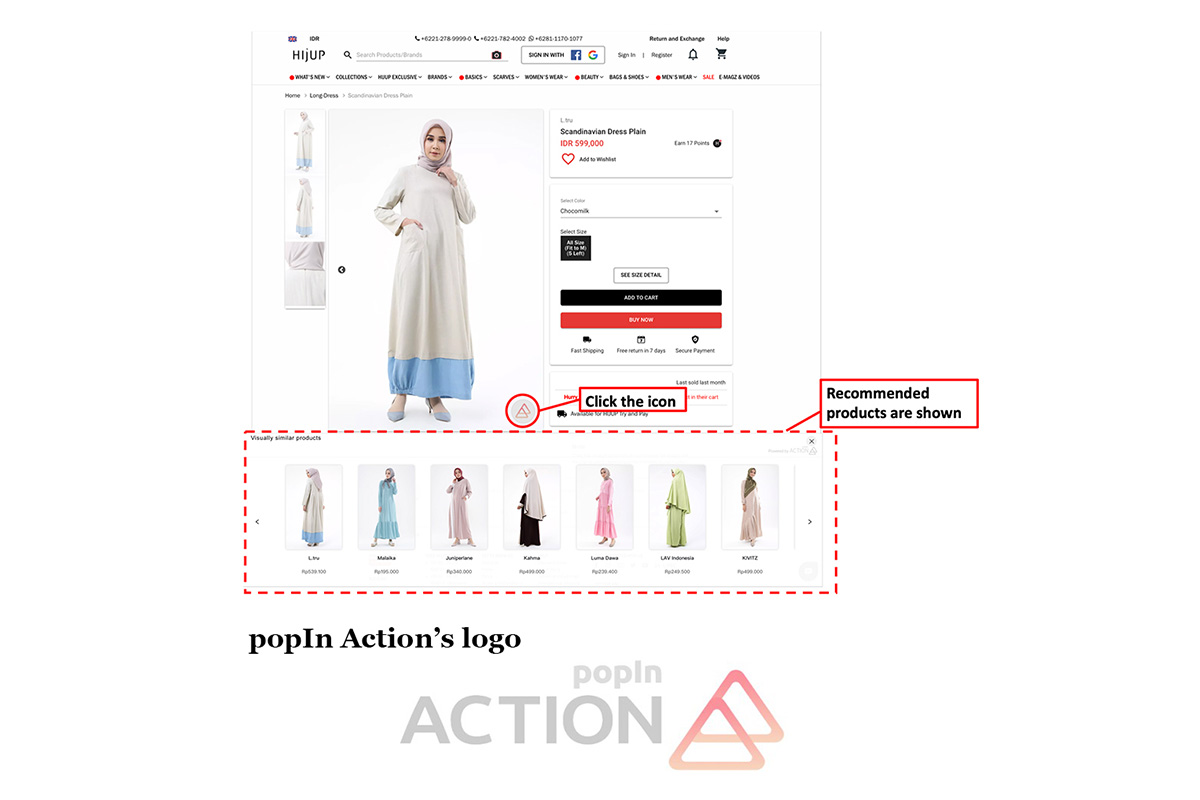 What is popIn Action? (https://action.popin.cc/)

popIn Action is a service that helps e-commerce site visitors find the products they want. It comes with a visual recommendation feature to show similar products to the products that a user is browsing or has uploaded on the site.

The product recommendation engine used by conventional e-commerce sites mainly employ collaborative filtering systems, which are generated by prediction – a user who bought a certain product is likely to buy other products that are often purchased with it. In order to implement accurate recommendations with a collaborative filtering system, an e-commerce site requires a large amount of historical user interaction data. Because popIn Action is able to show similar products by utilizing its image recognition technology and analyzing attributes of products such as color, patterns, shape and material, e-commerce sites can easily recommend similar products without historical user interaction data on those products.

popIn Action offers two functions.1) Show recommended products similar to the one a user is browsing.2) Show similar products from the e-commerce catalog when a user uploads an image stored on a smartphone or PC

Because consumers cannot touch the physical products on e-commerce sites, how a product looks can be important deciding factors for users. Along with the recommendations through a collaborative filtering system, popIn Action expands purchase options for users, increasing the likelihood to purchase, which leads to more conversions.

By adding just a line of code from popIn Action, an e-commerce site is empowered by Visual Search and Vision AI recommendation.

Instead of charging by the number of APIs consumed or impressions, popIn Action charges only when users click the recommended products and then add the products into the shopping cart.

Because costs occur in accordance with conversions, e-commerce sites can integrate it with minimal risks.

popIn Action is a seamless service available for any website around the world, independent of languages by utilizing image recognition technology. We aim for the expansion of this Japan-originated service centered on Asia, and then grow globally.

popIn will continue to offer a variety of value for users and partners around the world.

Related Topics:latest-newsPueblo Foods
Up Next