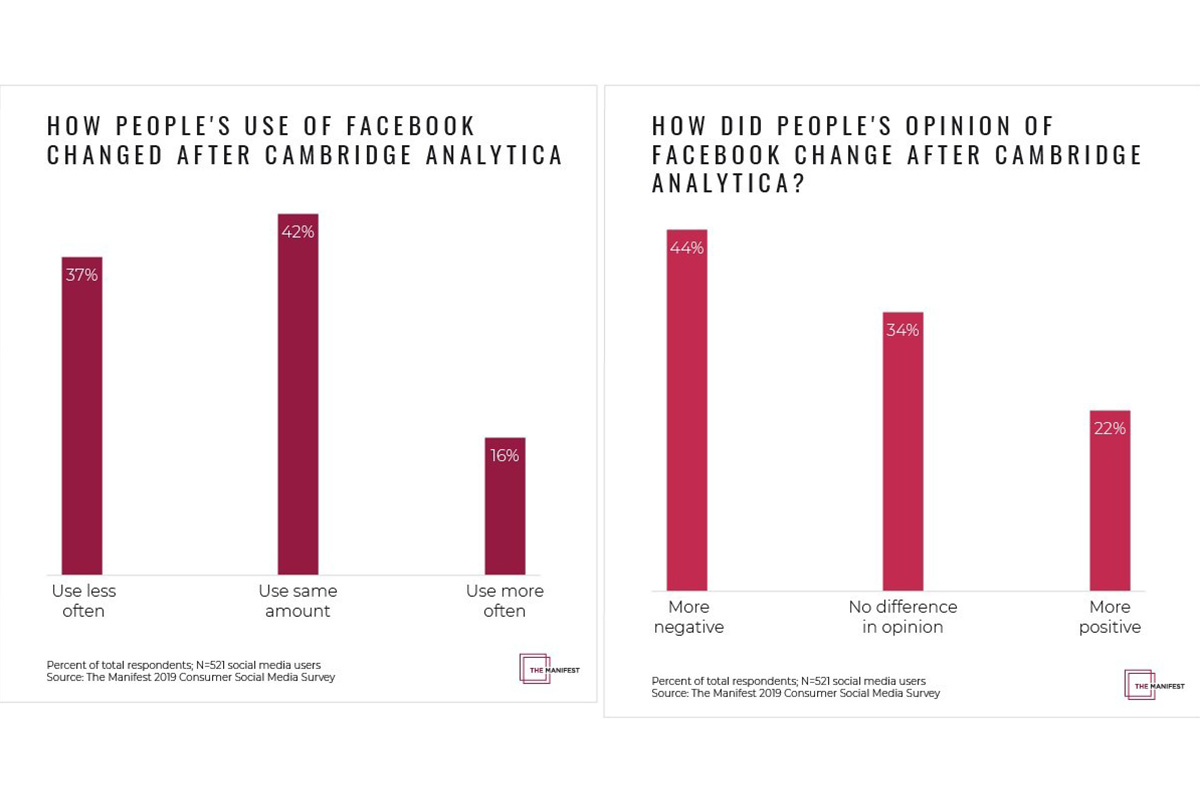 Despite some social media users' negative view of Facebook after Cambridge Analytica, nearly 60% still use Facebook the same amount or more, according to new survey data from The Manifest. / Nearly half of social media users surveyed (44%) said their view of Facebook became more negative after Cambridge Analytica, according to new data from The Manifest.
Reading Time: 3 minutes

Forty-four percent (44%) of social media users still have a negative opinion of Facebook because of the Cambridge Analytica data breach, according to a new survey from The Manifest, a business news and how-to website.

People became distrustful of Facebook because of Cambridge Analytica, and Facebook has not gained back some users’ trust.

“Facebook really tried to give an image that this type of thing wasn’t happening, that their data was safe,” said Steve Pearson, CEO of Friendemic, an online reputation company. “To see something like this come out, it was a blow to many consumers who were otherwise trusting.”

People view Facebook more negatively since the Cambridge Analytica data breach, but that doesn’t mean the scandal deterred people from using the platform.

Although people still view Facebook negatively, just 37% use Facebook less often than they did before the data breach.

“While they may say they have concerns, I don’t think it’s been enough for many of them to use Facebook less,” said Chad Richards, vice president of social media services at Firebelly Marketing, a social media marketing agency. “That ‘Quit Facebook’ movement lost steam.”

People are still upset with Facebook but not enough to leave it.

Some businesses, too, still value Facebook and use it as often as before the breach.

“We continue to use Facebook as frequently as we did before,” said Katharine Pebworth, a digital marketer at Alexander Advertising. “We haven’t seen a huge difference in our engagement rates and continue to incorporate Facebook into all our digital marketing campaigns and strategies.”

Forty-one percent (41%) of millennials use Facebook less because of the data breach, compared to 37% of Generation Xers and 24% of baby boomers.

“When [millennials] leave Facebook, they don’t fully lose the information and sense of belonging that they have on social media,” said Josh Krakauer, founder and CEO of Sculpt, a social media marketing agency. “It doesn’t feel like a lifeline was totally cut off for some of them, where it might for an older user.”

The Manifest’s 2019 Consumer Social Media Survey included 521 people in the U.S. who use social media at least once per week.

For questions about the survey, a comment on the findings, or an introduction to the industry experts included in the report, contact Kristen Herhold at 211719@email4pr.com.