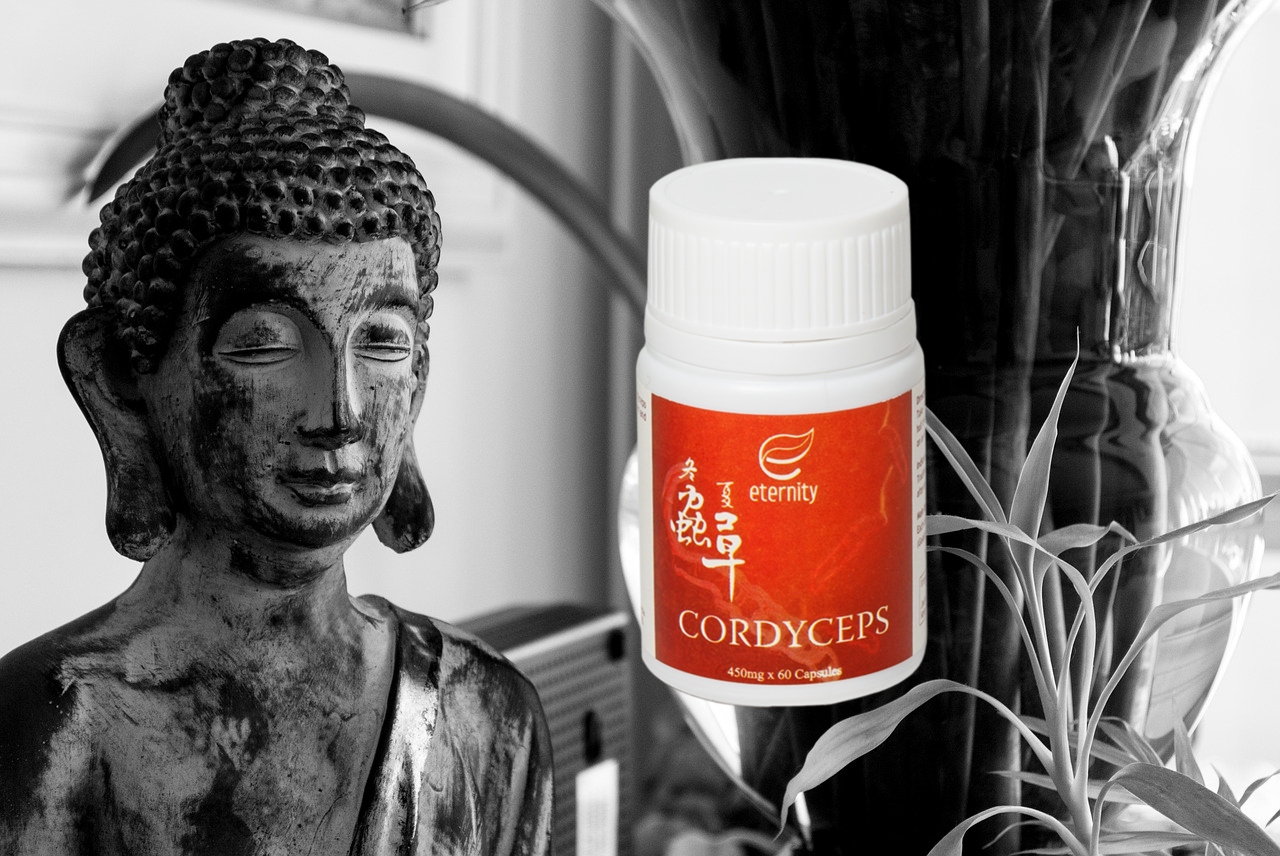 We present a product that should not be lacking from our body as nutrient and as a daily food.

Cordyceps Sinensis has been described as a medicine, already in the old Chinese medical books and in Tibetan medicine. It is a rare fungus found at altitudes above 4500m in Sikkim. Traditional healers and locals from North Sikkim recommend this fungus for all diseases, either as a single compound or combined with other medicinal plants. A study was conducted to collect information on the traditional uses of Cordyceps in Sikkim. This study found that most of the traditional local healers use Cordyceps for the treatment of 21 diseases. This is why modern research has been carried out to evaluate whether these curative effects are goodwill and not just aberrations of locals. Pharmacological studies also has shown the chemical and biological construction of cordyceps. More clinical trials have been conducted on disease and mechanism.

Let’s see why some plants and mushrooms were used by people in those regions.

The mushrooms were used primarily as food, and then as medicine, but they have been used in spiritual practices and religious rituals around the world since the 5,000 BC.

Gordon Wasson (father of mycology) believed that the Soma plant used in religious ceremonies, now more than 4000 years before the beginning of the Christian era, by the people called “Arians”, was actually a fungus.

The Vedic juice called “soma race” it says that have given divine qualities to the soul of the consumer, even immortality. Ayurveda classifies mushrooms in Tamasika Ahara, as a medicine to increase energy and vitality. Cordyceps Sinensis has been described in ancient Chinese medical books from ancient times, and is also found in Tibetan medicine.

Traditional healers in Sikkim recommend Cordyceps Sinensis for “all diseases” as a universal tonic for body, mind and soul. They claim to improve energy, appetite, strength, libido and sleep. The North of Sikkim is a great reservation of natural medicines and aromatic plants from high altitudes. The people there own a thesaurus of knowledge and management of their use. There are a number of renowned classes among practitioners like Amchi (Tibetan) and Vaidyas (folk healers). The relevant information was collected from locals, local practitioners, healers, as well as directly from herbal collectors during the visting of Lachung and Lachen, between June 2008 and September 2009.

The information was collected through an indefinite questionnaire from a large number of individual respondents as well as semi-structured interviews. They were asked to name the local herbs and talk about their traditional and commercial uses, and how to administer them. The information obtained in each locality was verified in different places with other respondents. To prove the usefulness of Cordyceps, the scientific information of chemical constituents, curative, biological studies, and all pharmacological studies have been gathered and reviewed and carefully studied.

The people of the North-Sikkim have called this plant herb yarsa gumba; Tibetan name [winter (yarsa) and summer (gumba)]. In the literature, “gunba” or “gonba” were also used instead of “gumba”.

Local Nepalese called Keera Jhar (insect herb). It is also known as Himalayan Viagra. It costs about $ 6.77 per piece on the international market and is available locally at Rs.100 / – per piece. Initially, local pastors noticed that yak, goat, sheep, etc. who consumed Cordyceps Sinensis during the grazing, they became very strong and robust. This observation opened the way for the discovery of its medical value. Afterwards, locals and pastors used fungus powder to increase milk production, and to improve their reproductive capacity and vitality in their cattle. Then its relevant medicinal properties were explored, collecting only the upper part (fruit body / Stroma), which they dried at the sun. Then, they consumed it and were convinced of its medicinal effects. They have also said that it has aphrodisiac effects, and therefore they also used to give as a gift to relatives and friends in Gangtok and adjacent areas.

Currently, local folk practitioners use the product alone or in combination with other herbs to treat various diseases.They administer in different doses for different conditions. People of both sexes usually use a piece of Cordyceps Sinensis with a cup of milk to enhance potency and sexual desire. The Bhutia community used it by putting a piece of Cordyceps Sinensis in a cup of local alcohol (Chang), left for 1 hour and drank it in the evening for a good night’s sleep. Some used hot water instead of alcohol. Some popular healers used Cordyceps Sinensis for diabetes and other diseases. It is also used for cancer, mixed with texus leaves and Ginseng root.

Similar reports are also available in Nepal. It has been noticed that after its prolonged use among the population, some have escaped from about 21 diseases, including cancer, bronchial asthma, bronchitis, TB, diabetes, coughs and colds, BHP, jaundice, hepatitis etc.

Various pharmacological and biological studies have demonstrated the curative effect of cordyceps involving various experimental models (in vitro and in vivo) and some clinical studies in volunteer athletes. It has been concluded that Cordyceps Sinensis has a very broad, biological and pharmacological action in liver problems, kidney disease, and cardiovascular disease. It has positive effects on immunological disorders, including cancer. The pharmacological actions of Cordyceps are primarily due to bioactive polysaccharides, modified nucleosides, and cyclosporine. Also, the fermentable strain of mycelium produces normal fat and beta-oxidation, thus maintaining blood glucose levels during prolonged exercise in athletes.

Cordyceps has been shown to be a major chemical constituent, which is cordycepic acid and along with other amino acids, vitamins and minerals is a super food with excellent medical properties.

Gano Excel’s Cordyceps has all these healing effects and has studied from a really long period, but the advantage is that has a very modern and eco- friendly,  in-house and innovative manufacturing process, which means we can have it in our homes very easily.

The founder of Gano Excel, a scientist and mycologist, came to the conclusion that, apart from Ganoderma Lucidum (the 6 types), which is used in its products, Cordyceps is a very important plant, precisely because of its large scale of usage and healing properties. Gano Excel puts great emphasis on the quality of its products. It is very important how much of this plant (fungus) is used, how pure and clean is from other organisms. So, the right dose, pureness, and quality control is very important. At Gano Excel, Cordyceps is called Cordyceps Eternity and is called Dong Chong Xia Cao ‘or’ Semitake ‘in Japan. It is an effective treatments for kidney disease and also had the following curative effects – lowering of blood pressure and blood glucose; regulating the immune system and increasing immunity; anti-clotting, anti-inflammatory, etc.

Prof. Fumio Tsurudani of Nagoya, Japan’s Medical University Institute has conducted an experiment in patients with kidney disease to check the efficacy of Ganoderma Lucidum and Cordyceps. After the administration of these two mushrooms, a good kidney function was found and the disease reversed. Thus, kidney disease can be healed significantly by administering ganoderma and cordyceps together.

Also an Effective treatment could be the administration of Cordyceps and Ganoderma together with vitamin C, but not necessarily, this must be seen in every patient differently and individual.

We can find on other websites about this wonderful product lots of information. This product is aimed at both children and adults to maintain a high level of health and stamina.

– supports the activity of the adrenal glands

– antioxidant: increases the antioxidant enzyme, which is superoxide dismutase

“Through the cultivation method developed by GANO Excel – the spore multiplication – which is 100% plant –  by careful observation of the growth process, and the optimal harvesting, the therapeutic potential of Cordyceps Gano Excel grows 10 times the growth rate in the spontaneous flora in the nature.”

How to overcome Business Intelligence Challenges and Issues Entrepreneurs Facing