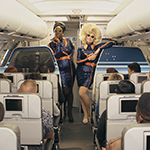 JetBlue Honors its Commitment to the LGBTQ Community with Continued
Support for The Stonewall Inn Gives Back Initiative, The Center, New
York Gay Men’s Chorus and Various Other Events

“With crewmembers and customers reflecting incredible diversity, we
celebrate all our differences and live JetBlue’s mission to inspire
humanity as a leader in inclusion both inside and outside the company,”
said Joanna Geraghty, president and chief operating officer, JetBlue.
“Every day, but especially as we celebrate World Pride in our hometown,
JetBlue values the uniqueness of each and every individual – not only
because it’s the right thing to do in keeping with our integrity value,
but because we think it’s more fun that way, too.”

To kick off the partnership with RuPaul’s Drag Race and to
celebrate the introduction of “Shantay Blue Stay,” JetBlue is debuting a
one-of-a-kind, glittering video featuring fan-favorite queens Bob the
Drag Queen and Trixie Mattel. The pair demonstrate for their lives as
they highlight JetBlue customer-friendly favorites like the most legroom
in coach (a), free and unlimited brand-name snacks and more! The video
is available on RuPaul’s Drag Race, VH1 and JetBlue social media
channels.

Additionally, during the week of June 10, RuPaul’s Drag Race
celebrated Pride Month and the newly named plane with a terminal
takeover at JetBlue’s T5 at New York’s JFK International Airport. This
week, customers passing through T5 will see iconic photos, displays,
Instagram opportunities and the fiercest RuPaul quotes in drag race
HER-story. The takeover also lets travelers touch up their runway looks
at a hair and makeup station and send special postcards to spread the
World Pride love.

“For more than a decade, ‘RuPaul’s Drag Race’ has celebrated inclusivity
in all forms,” said Amy Wigler, Senior Vice President of Integrated
Marketing/Branded Content, VH1. “It is VH1’s goal to align the show with
like-minded organizations who are also committed to bettering humanity
through love and acceptance which is why we are thrilled to be
partnering with JetBlue on this very special pride month initiative.”

JetBlue’s “Shantay Blue Stay” aircraft will operate on a variety of
routes throughout the JetBlue network in the U.S., Caribbean and Latin
America, so keep your lashes on the lookout!

The Stonewall Inn Gives Back Initiative
Drag queens have
played a vital role in the fight for LGBTQ equality including during the
1969 Stonewall Inn uprisings. For the third year in a row, JetBlue is a
proud supporter of The Stonewall Inn Gives Back Initiative (SIGBI),
which leverages the historic significance of the New York City LGBTQ
landmark to help other communities that don’t have the same LGBTQ
resources or support. JetBlue was an original SIGBI donor when the
nonprofit was formed in 2017.

This year SIGBI is supporting both the Tennessee Equality Project
Foundation and Project Q&A. The Tennessee Equality Project Foundation is
a nonprofit organization founded in 2005 to serve Tennessee’s statewide
LGBTQ community with advocacy education and providing legislative
monitoring and policy analysis. Project Q&A is an LGBTQ organization in
Montgomery County, Kansas focused on raising awareness for the LGBTQ
community through education, empowerment, and visibility.

“The battle that began for LGBTQ rights in 1969 at Stonewall is not over
and the fight is continuing in places where equality has been slow to
arrive,” said Stacy Lentz, Co-owner of the Stonewall Inn and CEO of The
Stonewall Inn Gives Back Initiative. “We couldn’t do our much needed
work without the help of incredible partners like JetBlue that make sure
we have the necessary resources we need to spread the legacy of
Stonewall and keep it at the forefront for the struggle for equality.”

JetBlue is also calling on Stonewall Inn patrons to help celebrate for a
good cause this month. On June 28 – the 50th anniversary of
the historic 1969 demonstrations – JetBlue will match every dollar spent
on drinks by customers at the Stonewall Inn with a donation directly to
SIGBI.

The Center
JetBlue is once again a proud supporter and the
official airline of The Lesbian, Gay, Bisexual & Transgender Community
Center – known locally as simply The Center. Since 1983, The Center has
been supporting, fostering and celebrating the LGBT community of New
York City and empowers people to lead healthy, successful lives. The
Center celebrates diversity and advocates for justice and opportunity.

New York Gay Men’s Chorus
JetBlue proudly continues to
support the New York City Gay Men’s Chorus (NYCGMC) for another year.
Founded in 1980, NYCGMC has formed a strong bond with devoted followers
and continues to make lasting connections with new and diverse
audiences. NYCGMC is comprised of more than 260 talented singers of
various ages, backgrounds and experiences, and is a full member of the
Gay and Lesbian Association of Choruses, Inc. (GALA), the world’s only
association committed to serving the LGBT choral movement.

Additionally, JetBlue has provided support for a variety of LGBT
nonprofits across the country including Boston Gay Men’s Chorus, Lambda
Legal, New York City Anti-Violence Project, NLGJA – the Association of
LGBT Journalists, OutRight Action International, the Trevor Project, the
Provincetown Business Guild and is a founding member of the
Massachusetts LGBT Chamber of Commerce.

JetPride
JetPride became JetBlue’s first Crewmember Resource
Group in 2012, welcome to all LGBT crewmembers and their allies.
JetPride strives to provide mentoring to develop their career paths,
support external JetBlue initiatives in the LGBT community, bring
increased visibility to and perspective on LGBT workplace issues, and
advocate for a continued bias-free workplace where LGBT JetBlue
crewmembers can thrive.