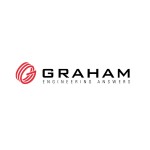 James R. Lines, Graham’s President and Chief Executive Officer,
commented, “We had solid revenue growth in the quarter and the year, as
expected. However, the mix of projects and performance of our commercial
nuclear utility business dampened gross margins throughout the year.
While disappointing, we remain focused on solid execution and quality
service for our customers, and strong cost discipline to strengthen our
earnings potential. Likewise, we will continue to invest in our business
in line with our strategy to drive our long-term future.”

He added, “Our investments in personnel for our strategy are affecting
margins in the near term but remain important as we identify and capture
opportunities to achieve our growth and profitability goals. We are
encouraged by our solid order activity and strong backlog, which give us
confidence in a healthy outlook for the coming fiscal year and beyond.”

Consolidated net sales were up $1.4 million, or 7%, driven by $3.8
million and $1.7 million increases in sales to the
chemical/petrochemical and refining industries, respectively. These
increases were partially offset by $2.8 million and $1.2 million of
lower sales to the Company’s other commercial, industrial and defense
markets, and the power industry, respectively.

Fluctuations in Graham’s sales among geographic locations and
industries can vary measurably from quarter-to-quarter based on the
timing and magnitude of projects. Graham does not believe that
such quarter-to-quarter fluctuations are indicative of business trends,
which it believes are more apparent on a trailing twelve month basis.

Refer to pages 11 and 12 of this press release.

Given ongoing challenges in the nuclear industry faced by relatively
small market participants, during the fourth quarter of fiscal 2019 the
Company decided to divest its commercial nuclear utility business,
Energy Steel. Upon evaluating the potential market value of the Energy
Steel business, Graham determined that the intangible assets, goodwill,
and other long-lived assets were impaired. Accordingly, the Company
recorded a $6.4 million impairment charge, $5.3 million net of tax, in
the fiscal 2019 fourth quarter.

Jeffrey Glajch, Graham’s Vice President and Chief Financial Officer,
noted, “While Energy Steel was successful in prior years, the changes in
the commercial nuclear utility industry over the last several years have
caused significant erosion of this business. Accordingly, we have
decided that it has more potential with a different partner and we are
in discussions to sell the business.”

Adjusted EBITDA (defined as consolidated net (loss) income before net
interest income, income taxes, depreciation and amortization, goodwill
and other impairments and other charges associated with the revaluation
of the commercial nuclear utility business, and a nonrecurring
restructuring charge, where applicable) was approximately the same
during the fiscal 2019 and fiscal 2018 fourth quarters.

Refer to pages 11 and 12 of this press release.

The improvement in operating loss, operating margin, net loss and
diluted EPS during fiscal 2019 compared with fiscal 2018 was primarily
driven by the change in impairment charges for goodwill and intangible
and other long-lived assets. Adjusted net income and adjusted EPS
exclude such charges as well as other items, resulting in a $3.2 million
and $0.33 improvement over the prior year, respectively, driven by
higher sales and improved operating performance.

The increase in gross profit and margin were driven by higher volume
stemming from the 18% increase in sales when compared with the prior
year, as well as ongoing improvement to backlog quality and project mix,
partially offset by higher production costs.

SG&A in fiscal 2019 was $17.9 million, up 13%, or $2.1 million. The
increase in SG&A was primarily due to higher compensation costs for new
personnel, higher sales-related costs, and higher performance-based
compensation. As a percent of sales, SG&A was 20% for both fiscal 2019
and 2018.

Similar to the fourth quarter, Graham’s effective tax rate for fiscal
2019 was not meaningful due to the non-deductibility of the goodwill
portion of the commercial nuclear utility business write down. Fiscal
2018 results were impacted by a $0.8 million favorable adjustment to
income taxes upon implementation of the 2017 U.S. Tax Cuts and Jobs Act,
which also had a beneficial impact on the fiscal 2019 overall effective
tax rate.

Fiscal 2019 cash provided by operations was $7.9 million, compared with
$8.5 million in fiscal 2018. The decrease was primarily the result of
timing of changes in working capital, partially offset by higher
adjusted net income.

Capital expenditures were $2.1 million in fiscal 2019, approximately the
same level as the prior year. The Company expects capital expenditures
for fiscal 2020 to be between $2.5 million and $2.8 million, the
majority of which are expected to be used for productivity enhancements.

Graham had neither borrowings under its credit facility, nor any
long-term debt outstanding, at March 31, 2019.

The Company believes that its backlog mix by industry highlights the
success of its diversification strategy to increase sales to the U.S.
Navy. Backlog by industry at March 31, 2019 was approximately:

The expected timing for the Company’s backlog to convert to sales is as
follows:

Graham expects that the balance between domestic and international
orders, as well as orders by industry, will continue to be variable
between quarters.

Graham is also announcing its fiscal 2020 guidance, as follows:

Mr. Lines concluded, “I believe that the energy cycle continues to show
signs of recovery, which is embedded in our fiscal 2020 expectation for
14% to 20% revenue growth for our ongoing business. Our strong pipeline
of projects combined with the Navy work currently in backlog provides us
solid confidence in our outlook for the year. Additionally, we remain
very active in the pursuit of strategic opportunities to put our capital
to work and complement our organic growth initiatives.”

Graham’s management will host a conference call and live webcast today
at 11:00 a.m. Eastern Time to review its financial condition and
operating results for the fourth quarter and full year fiscal 2019, as
well as its strategy and outlook. The review will be accompanied by a
slide presentation which will be made available immediately prior to the
conference call on Graham’s website at www.graham-mfg.com
under the heading “Investor Relations.” A question-and-answer session
will follow the formal presentation.

Graham’s conference call can be accessed by calling (201) 689-8560.
Alternatively, the webcast can be monitored on Graham’s website at www.graham-mfg.com
under the heading “Investor Relations.”

Graham is a global business that designs, manufactures and sells
critical equipment for the energy, defense and chemical/petrochemical
industries. Energy markets include oil refining, cogeneration, and
alternative power. For the defense industry, the Company’s equipment is
used in nuclear propulsion power systems for the U.S. Navy. Graham’s
global brand is built upon world-renowned engineering expertise in
vacuum and heat transfer technology, responsive and flexible service and
unsurpassed quality. Graham designs and manufactures custom-engineered
ejectors, vacuum pumping systems, surface condensers and vacuum systems.
Graham’s equipment can also be found in other diverse applications such
as metal refining, pulp and paper processing, water heating,
refrigeration, desalination, food processing, pharmaceutical, heating,
ventilating and air conditioning. Graham’s reach spans the globe and its
equipment is installed in facilities from North and South America to
Europe, Asia, Africa and the Middle East.

Graham routinely posts news and other important information on its
website, www.graham-mfg.com,
where additional comprehensive information on Graham Corporation and its
subsidiaries can be found.

Forward-looking statements are subject to risks, uncertainties and
assumptions and are identified by words such as “expects,” “estimates,”
“confidence,” “projects,” “typically,” “outlook,” “anticipates,”
“believes,” “appears,” “could,” “opportunities,” “seeking,” “plans,”
“aim,” “pursuit,” “look towards” and other similar words. All statements
addressing operating performance, events, or developments that Graham
Corporation expects or anticipates will occur in the future, including
but not limited to, expected expansion and growth opportunities within
its domestic and international markets, anticipated revenue, the timing
of conversion of backlog to sales, market presence, profit margins, tax
rates, foreign sales operations, its ability to improve cost
competitiveness, customer preferences, changes in market conditions in
the industries in which it operates, changes in commodities prices, the
effect on its business of volatility in commodities prices, changes in
general economic conditions and customer behavior, forecasts regarding
the timing and scope of the economic recovery in its markets, its
acquisition and growth strategy and the expected performance of Energy
Steel & Supply Co. and its operations in China and other international
locations, are forward-looking statements. Because they are
forward-looking, they should be evaluated in light of important risk
factors and uncertainties. These risk factors and uncertainties are more
fully described in Graham Corporation’s most recent Annual Report filed
with the Securities and Exchange Commission, included under the heading
entitled “Risk Factors.”

Should one or more of these risks or uncertainties materialize, or
should any of Graham Corporation’s underlying assumptions prove
incorrect, actual results may vary materially from those currently
anticipated. In addition, undue reliance should not be placed on Graham
Corporation’s forward-looking statements. Except as required by law,
Graham Corporation disclaims any obligation to update or publicly
announce any revisions to any of the forward-looking statements
contained in this news release.

Tooyn Tech Launches the World’s Thinnest MacBook Charger, Doubling Up as a USB-C Hub and a Wireless Charger

European Power Generation Construction Projects, 2019 – Wind Power Projects Account for 61.4% of the Total Pipeline, Ahead of Nuclear with 14.1% – ResearchAndMarkets.com