Following the surprising appearance of Kia’s newest SUV, the upcoming Telluride, at this year’s New York Fashion Week9, the brand known for taking chances returns to SEMA with an outdoor activation that’s bigger and better than ever, eclipsing Kia’s 2017 SEMA drifting experience. Designed as a thrill ride for those brave enough to jump into the passenger seats of four highly-modified Tellurides, Kia’s 2018 “Torque Track,” located just outside the sprawling Las Vegas Convention Center (Orange lot), promises to leave a lasting impression and will be running through Thursday. The custom off-road course puts these Tellurides through their paces, including a jump, mountain climb and water incursion – all showcasing their off-roading potential. Meanwhile, back by popular demand, professional Formula Drift drivers will provide ride-alongs, granting those with an adrenaline addiction the opportunity to be pinned against Stinger GT’s race-inspired seats. Drivers will effortlessly slide customized Stinger GTs around corners and launch the cars from 0-to-60 mph before bringing them to a full stop with the vehicles’ high-performance Brembo brakes.

“We surprised everyone with Telluride’s special appearance in New York earlier this year; we showed its stylish swagger on a fashion runway and now at SEMA we are showcasing the vehicle’s more rugged side,” said Saad Chehab, Vice President, Marketing Communications, Kia Motors America. “Of course a production Telluride won’t be able to fly over extreme jumps like these modified versions, but we want the SEMA attendees to get to know Kia as the youthful brand we are and we think the Torque Track does that in a very special way.”

Kia partnered with LGE-CTS Motorsports to conceive the four special-built Tellurides and each vehicle has its own distinctive design and style. Themed after different off-road environments, all four are powered by a stout V6 engine with all-wheel drive. The interiors showcase Telluride’s exquisite materials and craftsmanship and offer a quiet respite from the hectic SEMA show experience. Set to debut in its production form at the upcoming 2019 North American International Auto Show, the 8-occupant Telluride is planned to go on sale in the U.S. in the first half of next year.

Telluride Cadet Leader
Trailblazing is the kind of off-roading that can get very tricky, very quickly. An unseen drop, an off-camber articulation, a break-over that rips out the oil pan, being in front of it all requires some specialized equipment, including: 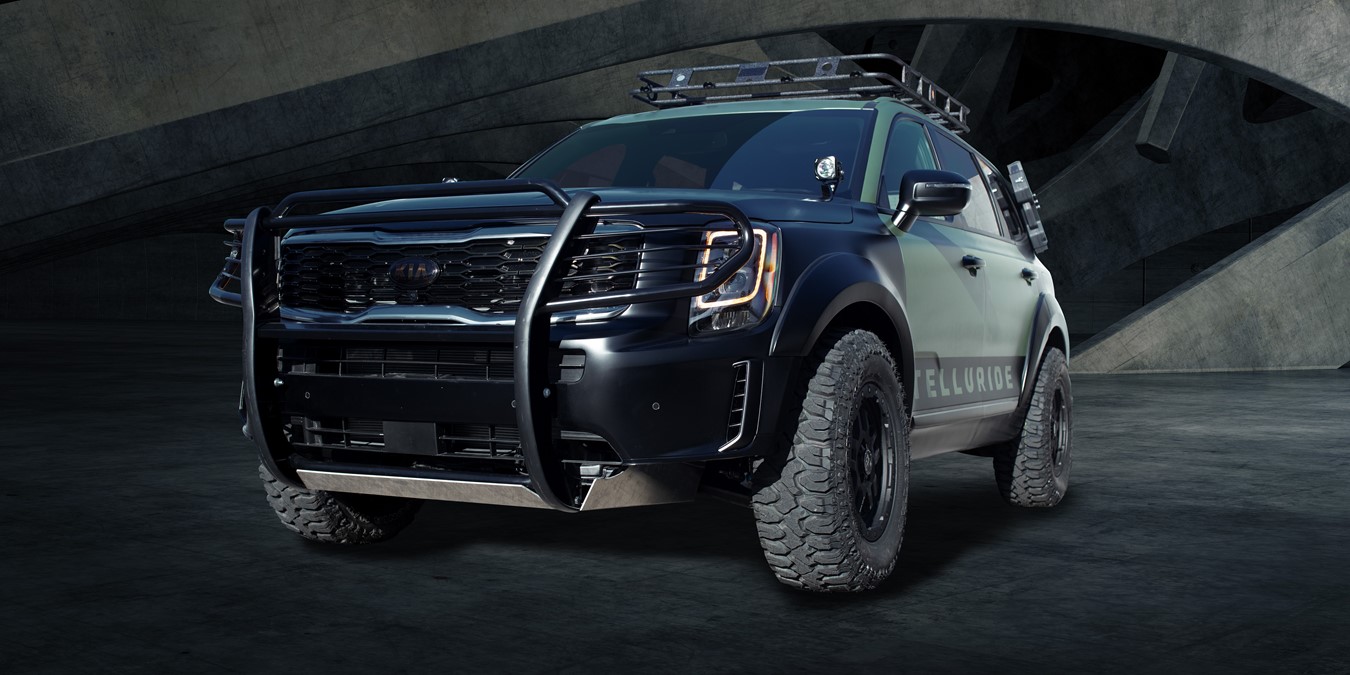 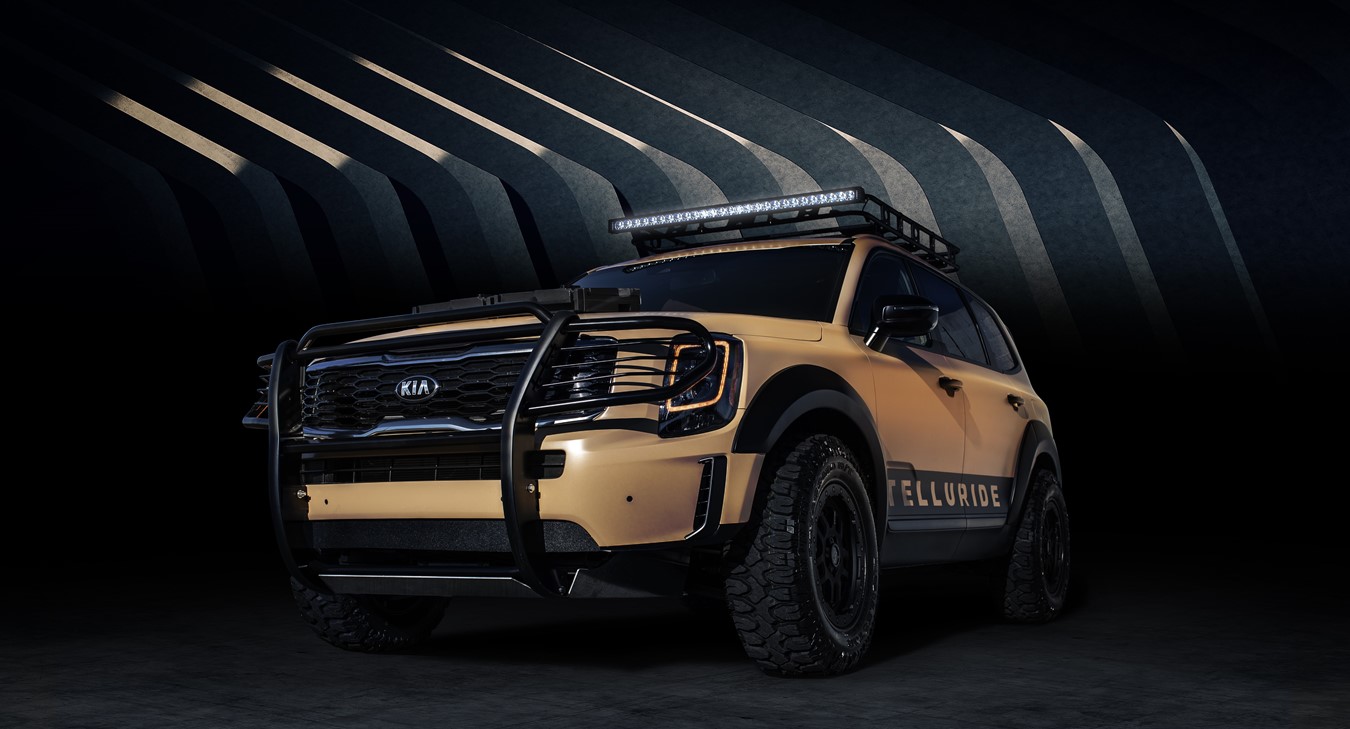 Telluride “Desert Drifter” performs in some of the harshest conditions

Don’t let the name fool you; “gliding” south of the border through Mexico’s legendary off-road countryside simply doesn’t happen. But properly equipped with some very tough gear, the Telluride Baja Glider makes a tough drive almost like a walk in the park. 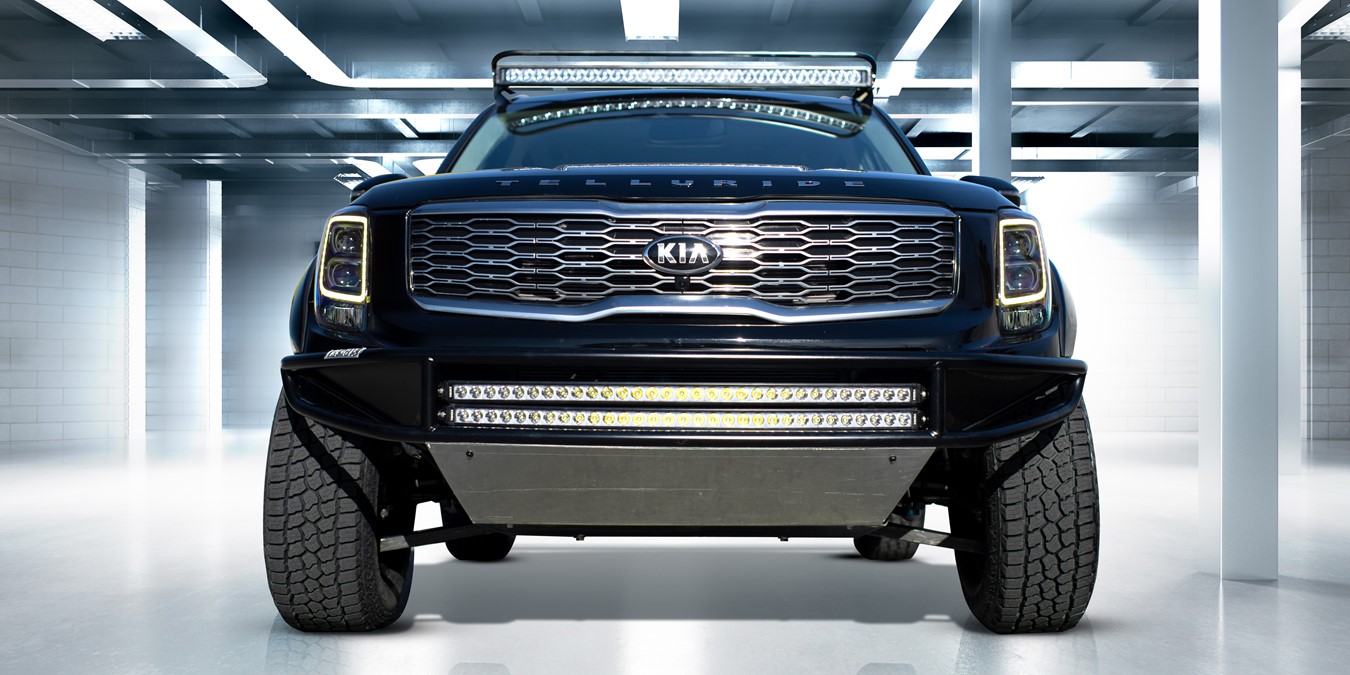 Suspension Modifications
Regardless of each Telluride’s off-road personality, all four have highly modified suspensions that have been purpose-built to handle the rigors of multiple days of abuse on the Kia Torque Track.

The one-of-a-kind Telluride provides a thought-provoking glimpse into the creative process that takes place when designers in separate industries collaborate. This specially tailored Telluride includes several nods to Maxwell’s Texas roots, including natural wood interior trim and saddle-inspired double-stitched leather adornments on the dash, door panels and grab handles. Similar leather details cover the outside rearview mirrors and door handles. Outside, the Telluride’s deep green paint reflects the color of the concept vehicle that debuted in Detroit two years ago. Custom front and rear bumpers, skidplates and sidestep sills exude a ranch-ready look that’s backed up with a hidden winch and a snorkel for deep-river fording. Burly 265/50R-20 off-road tires wrap around flat-black alloy wheels and the spare tire has been custom mounted to the rear hatch, which opens to a metal- and leather-trimmed cargo area. A custom wood and aluminum roof rack with a beautiful custom leather tow strap tongue provide the perfect finishing touches. 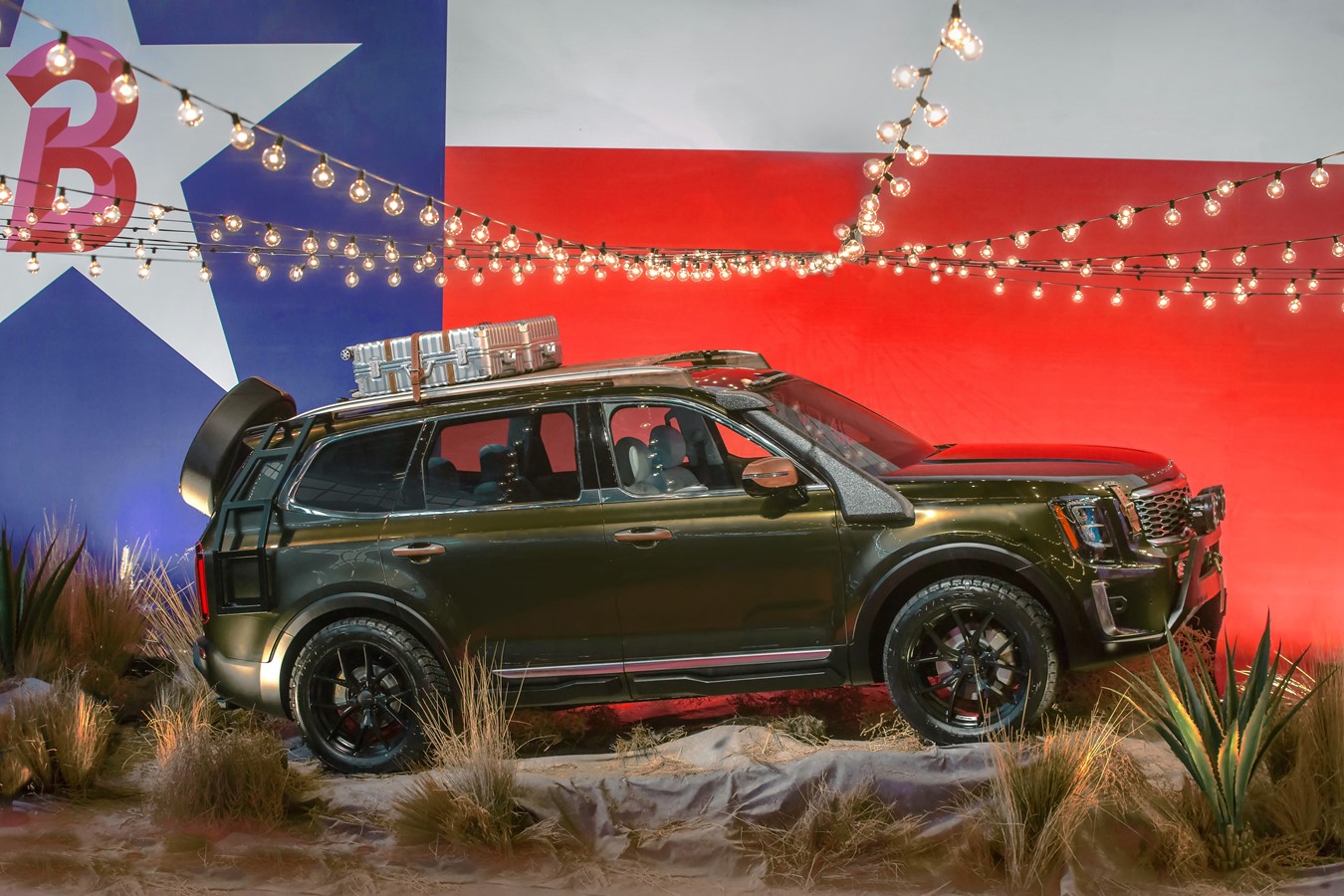 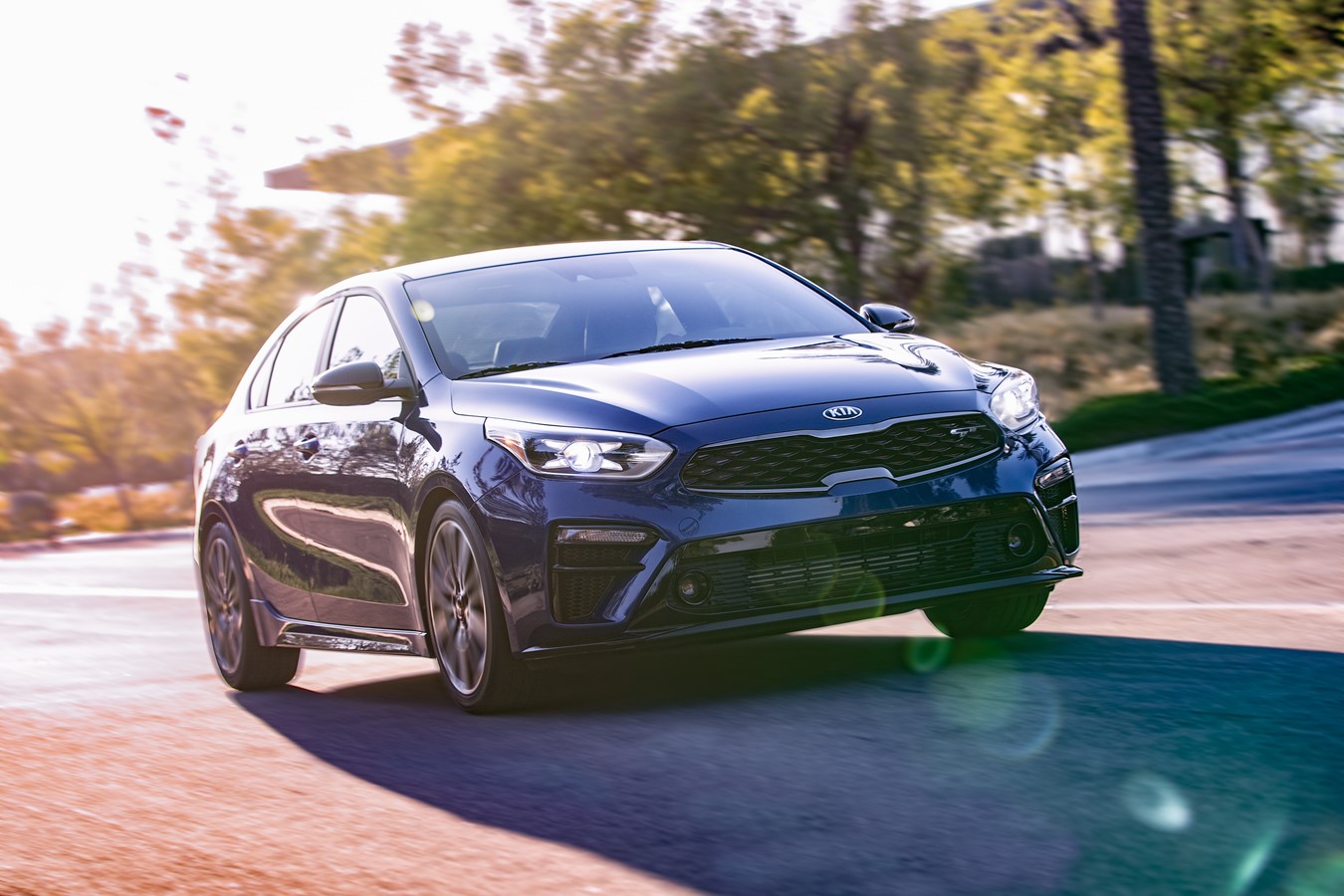 Queensland Police Stinger
When Australia’s Queensland Police needed a new fleet of pursuit vehicles, they went all-in on the 365-horsepower Kia Stinger GT. Citing the fastback’s performance during rigorous testing, Queensland police will put 100 Stinger GTs into service over the next 12 months. Testifying to the Stinger’s build quality, the only modification Queensland Police made to the Australian-spec Stinger is a plug-and-play wiring loom to accommodate the police electronics. Otherwise everything is standard—engine, brakes, suspension, etc. Special equipment, such as radios, emergency lights, and other equipment was added by Queensland Police. Assistant Queensland Police Service Commissioner (Road Policing Command) Mike Keating said the selection process was extensive. “It started with the desktop evaluation, then a track performance evaluation and then the operational evaluation conducted in real-world conditions. The final overall evaluation and review included the very important aspect of maintenance and cost. The Stinger performed very well in all areas and we had nothing but top reports from all the field officers. The result is a road-policing first for us, the first foreign car to perform these duties.” 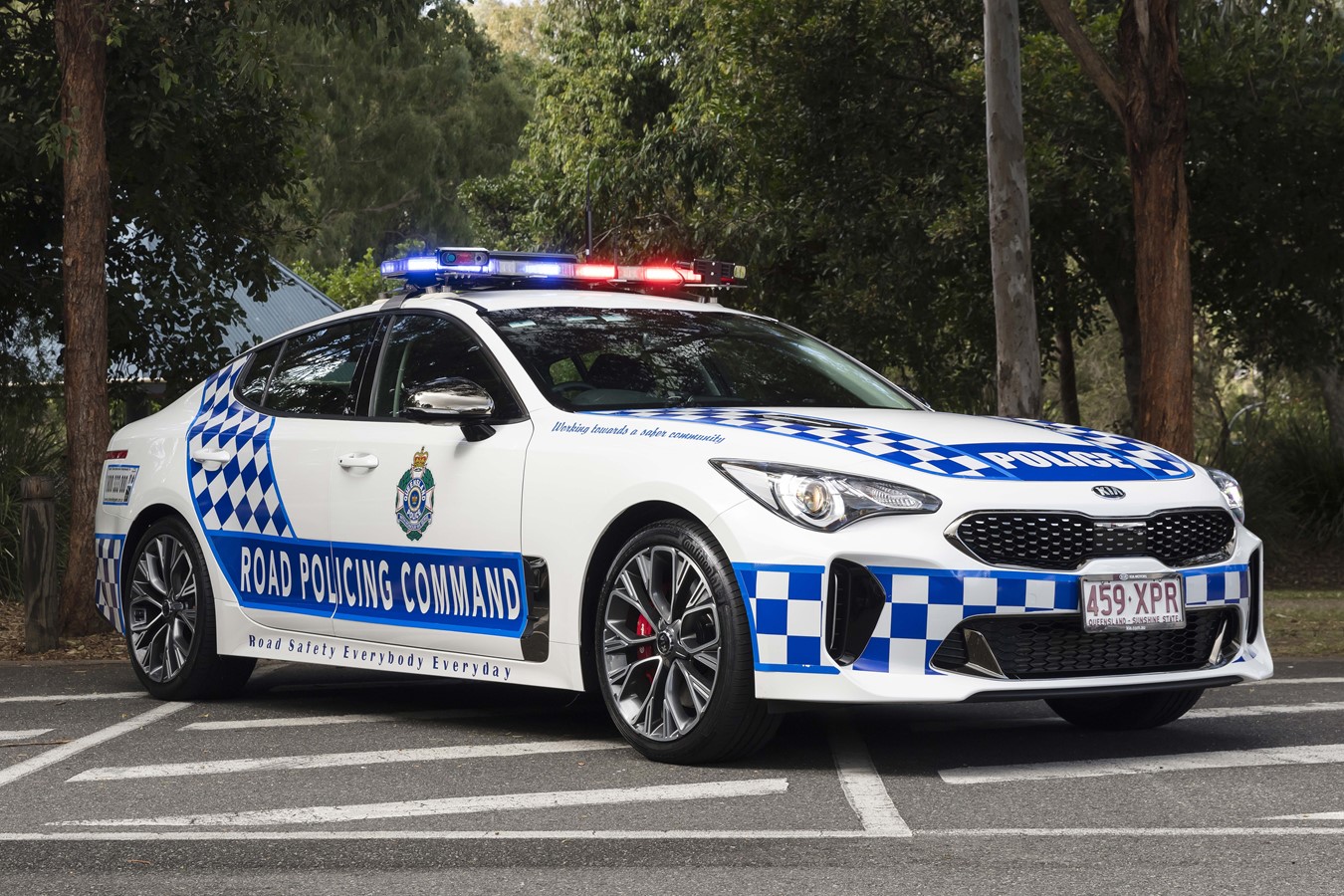 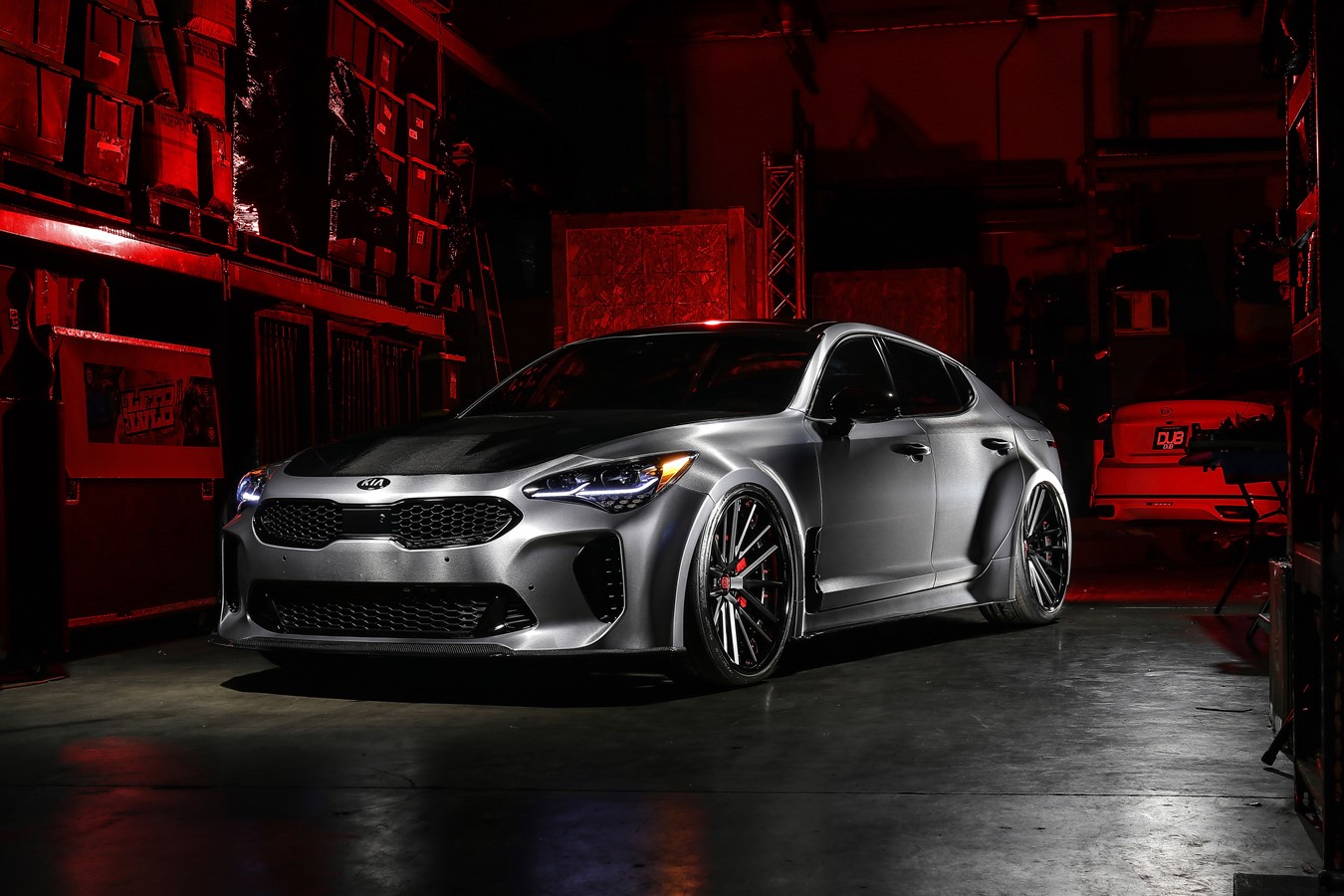 2019 DUB Kia K900
Fans of DUB’s distinctive style will love the transformation this luxury salon has undergone. Kia’s 2019 K900 provided the perfect canvas for DUB to unleash its creativity on this uninhibited custom ride. Veiled in electric blue, the wide body K900 features gloss black accents and, not to be outdone, the cockpit has been elegantly detailed with custom blue and black leather and suede upholstery, DUBiR tinted windows, and remote-controlled LED headliner and lighting. Riding on an air suspension to provide that perfect DUB look, this custom K900 rolls on 24-inch staggered TIS forged wheels and 275/25/24 Nitto tires. A specially developed multimedia audio system, remote-controlled LED lighting, and MiFi internet capability make the DUB K900 a rolling paradise. 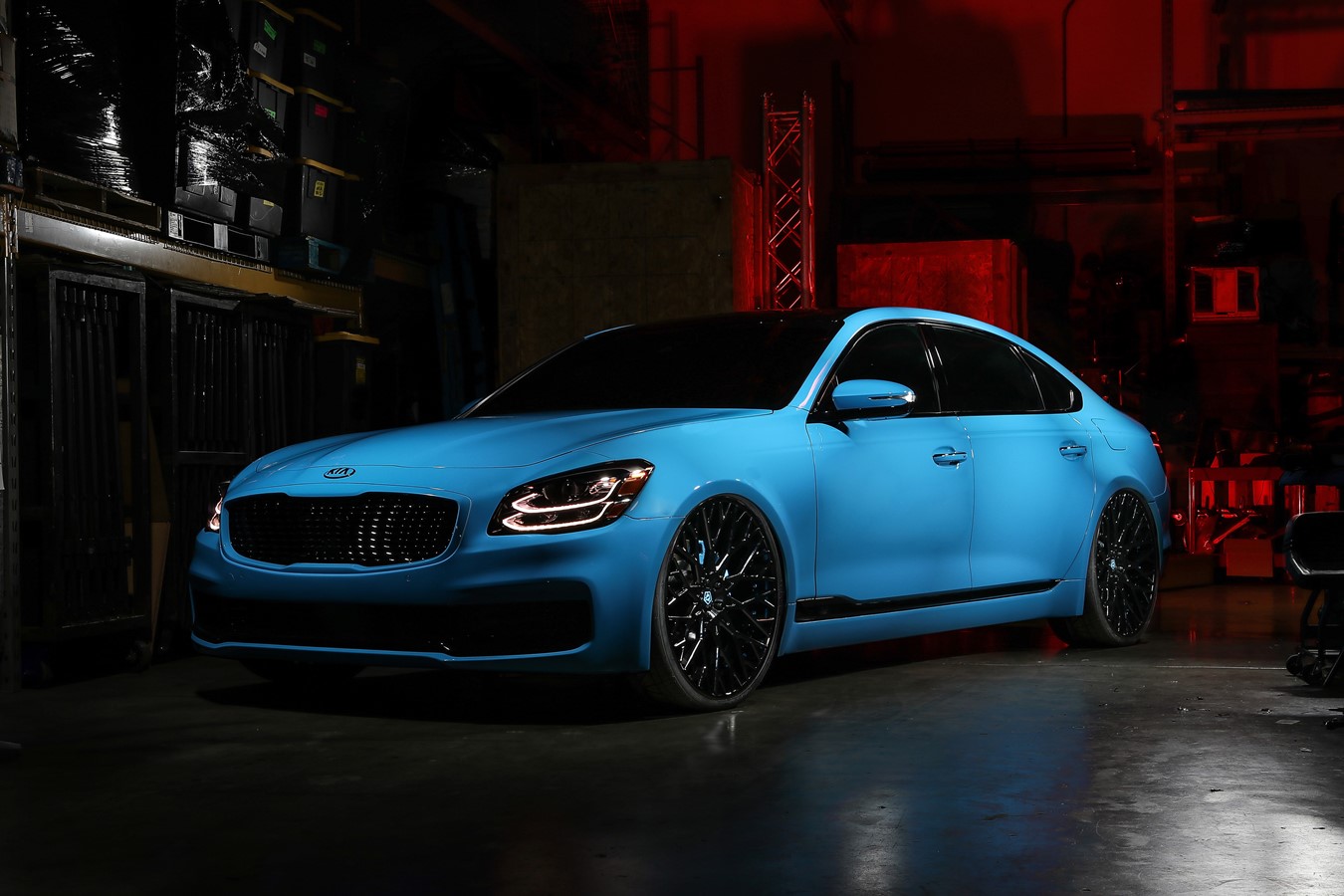 2019 Kia Forte Federation
Kia’s hot Forte Federation furthers Kia’s commitment to the aftermarket industry with a veritable cornucopia of performance and design enhancing accessories10. The unique vehicle is outfitted with parts from leading aftermarket suppliers, including aggressive aerodynamic components by Air Design such as a rear deck spoiler, rear diffuser, side skirts, front lip spoiler and front air curtains which all provide a stunning contrast for the Livid Lime paint scheme. A cold air intake by K&N coupled with an axle-back performance exhaust by Borla make this Forte scream. Meanwhile, progressive-rate sport springs by Eibach, 19-inch “Mosport” wheels by TSW and ultra-high-performance tires by Falken enhance handling. Adding fuel to the aftermarket fire, these parts and accessories will be available for purchase from the respective suppliers. 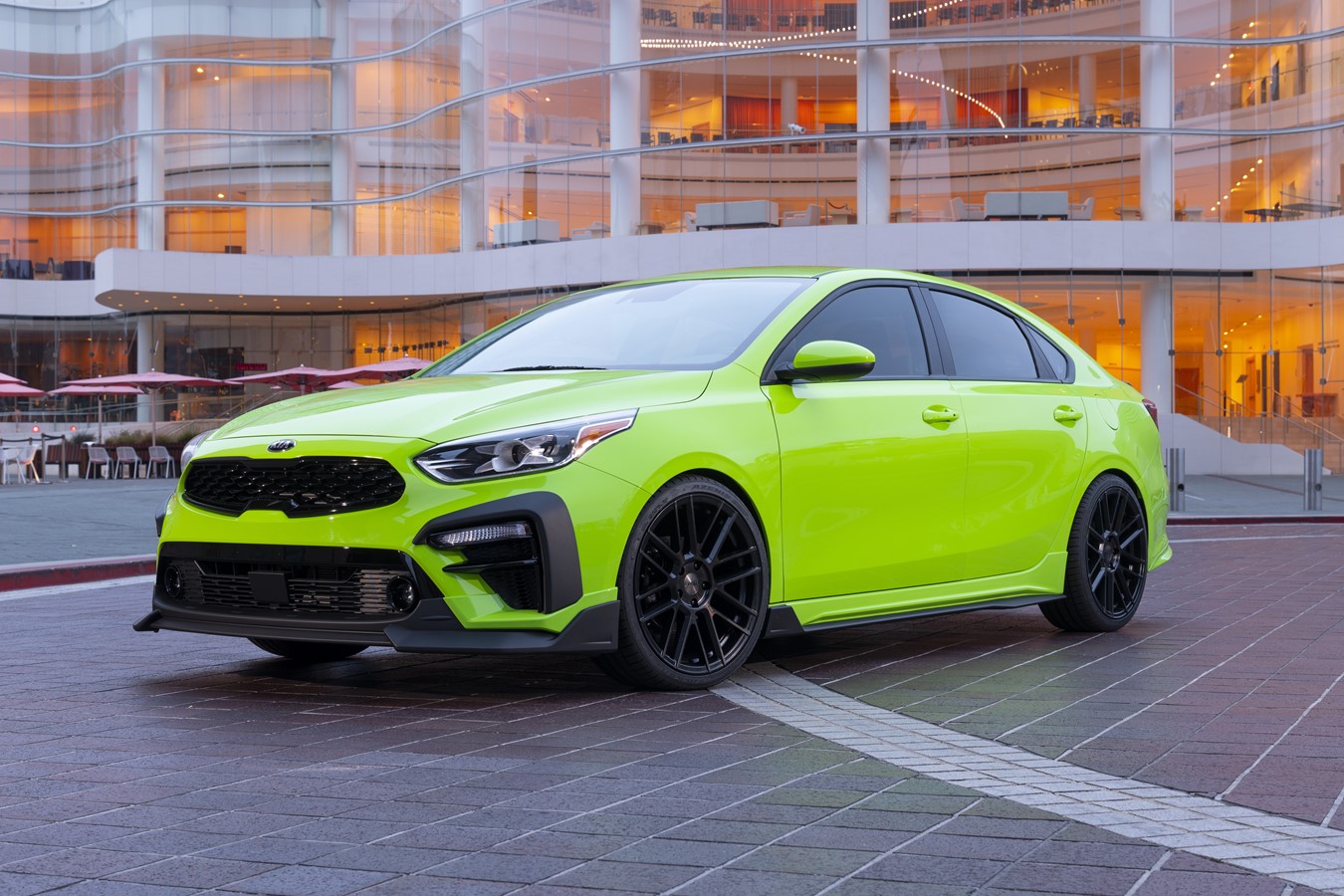 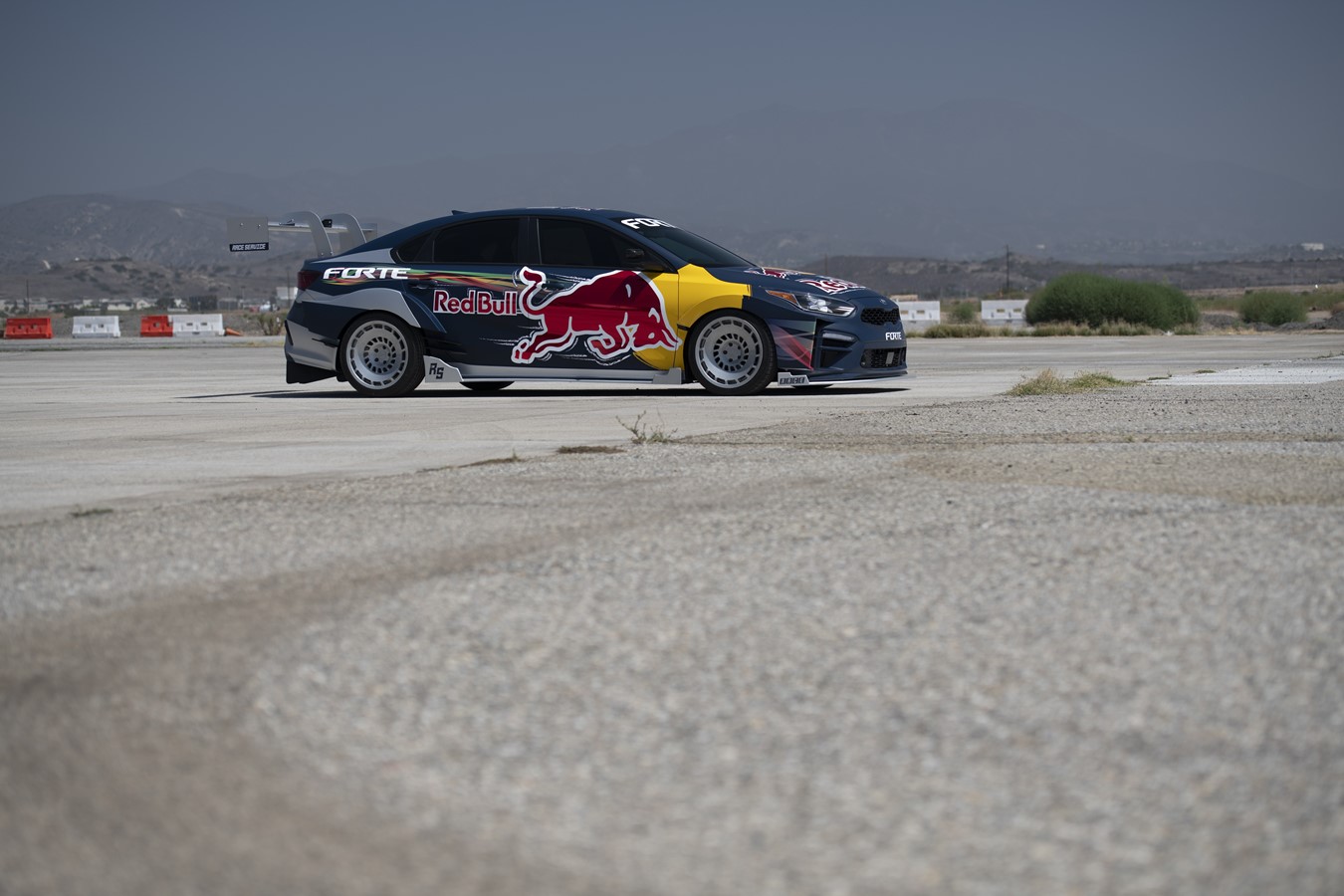 Outlook on the Artificial General Intelligence Global Market – Nearly 700% of Companies will...

PICANTE is a news publishing website which digests / hand picks the latest news about technology, entertainment, lifestyle, finance and politics and serves them to you daily.